This nuclear exclusion zone is surreal, like a post-apocalyptic wasteland, devoid of people. Smashed infrastructure, houses and vehicles mark the landscape, reminding us of the power of the sea.

We are in Japan to embark on an ocean voyage, an expedition studying tsunami debris and plastic pollution in the North Pacific, though departure delays have given us the time to visit Fukushima Prefecture, perhaps a more fitting beginning, volunteering in the epicentre of this human and environmental disaster. 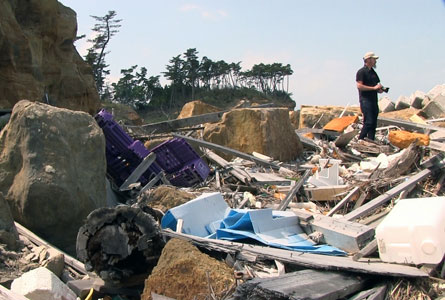 Mr Suzuki, who helped look after us during the clean-up said the cars with number plates still attached indicated their owners are unaccounted for. It is a snapshot of what the Japanese coastline looked like shortly after the tsunami hit, with nature slowly taking over.  Now this area has been opened again the survivors who chose to return are now slowly rebuilding their homes and cleaning up their properties. We were assigned to clear a drainage ditch around octogenarian Kazuko’s house which just escaped being destroyed by the Tsunami. Kazuko saw the wave approaching, flooding her fields and almost reaching her door. 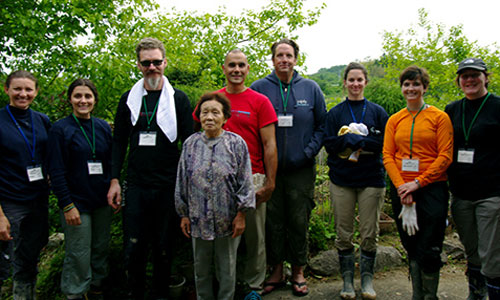 The Japanese people possess an incredible resilience apparent in the survivors and volunteers still working on rebuilding after the tsunami and nuclear disaster. Working side by side with these people was humbling and gave us a deeper understanding of the stories behind the tsunami wreckage we would be searching for in the north Pacific.

For me this all started with a facebook post on my wall, asking the question. “Would you like to join an expedition to sail across the north Pacific, tracking debris from the 2011 Japanese Tsunami and sampling plastic pollution?”  ... You betcha I would!!  The invitation came from Algalita Marine Research Foundation , founded by Captain Charles Moore, who first discovered what has become known as the “Great Pacific Garbage Patch”. Captain Moore will be touring Australia late September with his book “Plastic Ocean”.

As the founder of NGO Two Hands Project, which activates people globally on plastic pollution, this was a brilliant opportunity to participate in an offshore expedition studying the very plastic pollution my organization is working to eliminate. 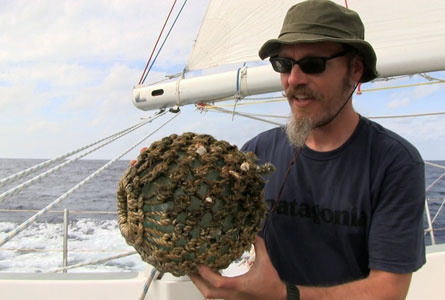 Although invited to join the expedition, a joint initiative between Algalita and 5/Gyres Institute, I still had to pay my way. The community of Sydney’s Northern beaches along with our online networks rallied to help Two Hands Project send me along.

I met the team in Yokohama, Japan, our port of departure. A mixed group, made up of scientists, students, artists, journalists, broadcasters and waste management experts from around the globe, we were linked by a common desire to learn more about marine plastic pollution.


Sunday the 10th June and finally the Sea Dragon departs, albeit a total of ten days late, mechanical repairs and an early onset of typhoon season kept us in Yokohama bay much longer than anticipated! We feel the effect of typhoon Mawar far to the north with some pretty uncomfortable sailing and heavy rain at times. Half the crew is sick and we suffer some minor damage to the boat when a hungry north Pacific roller tore one of our four life rings from the rail.

Within a week at sea everyone has settled in to our routine of three hour watches, 24 hours a day. An effective watch is essential to safety as large debris could easily sink us! The Sea Dragon is now 1000 nautical miles from the coast of Japan, on course for Hawaii and our target area 30°-35°N and 165°E to 170°W, sampling has commenced in earnest. We have three weeks and 2800 nautical miles to go. 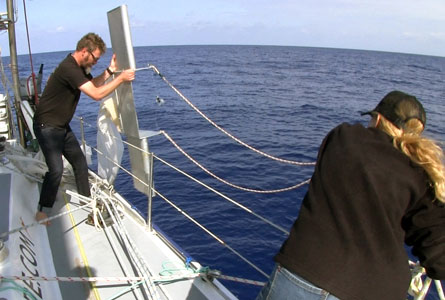 When conditions allow the crew take turns with making a nightly presentation, an entertaining diversion from shipboard responsibilities of watches, cleaning and cooking. Stiv shares a short story he wrote, Mandy her photographic portfolio, Laura teaches us about natural horsemanship and Daniella inspires us with the true story of a trash “picker” in Brazil.

As well as searching for tsunami debris and trawling for micro plastics  for 5 Gyres and Algalita we were taking samples for a number of other scientists and institutions. In fact Marcus Erikson of 5 Gyres commented we collected more data for other studies than we did for his own work! 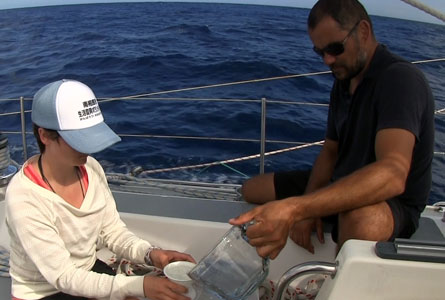 Following is an outline Marcus provided of the sampling and data collection we undertook during the expedition.

Every trawl we deployed came up plastic positive, it was quite incredible, from pre-production plastic pellets (like those spilt in the recent Hong Kong industrial plastic spill)  to unidentifiable plastic particles and whole objects like bottle caps, jars and toy wheels mixed in with pelagic fish, squid, plankton and other animals.  British artist Mandy Barker, the creator of SOUP is documenting the trawls as they come on board. We are waiting with bated breath to see what amazing work Mandy creates from these latest photos. 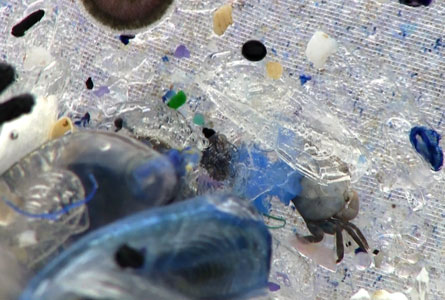 The visual observations of large debris was equally disturbing, we averaged a new piece of floating plastic being spotted every 3.6 minutes. In the most concentrated area I observed floating plastic every 53 seconds. These were items such as polystyrene particles, beverage bottles, buckets, helmets, shoes, crates and plastic fragments. Most surprisingly on the whole voyage we only saw one piece of natural driftwood and for three weeks we did not see another boat or aircraft, yet there was no shortage of synthetic trash.

The diversity of life on the floating plastic was remarkable, every item would be covered in life and even a bottle cap would support a pelagic crab. Net balls, conglomerations of net and rope, served as floating rock pools, providing habitat for species normally found in coastal environments. This highlights the potential of plastic pollution to translocate exotic species across oceans. 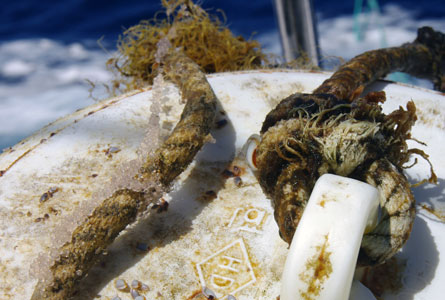 We recovered three pieces of high-likelihood tsunami debris.  A piece of tatami mat found at 31.03N, 155.56E on June 16th, a light truck tire at 30.29N, 164.07E on June 19th, and the bow of a Japanese fishing boat at 29.11N, 170.35E on June 22. Samples were sent to Dr. Takada in Tokyo for POPs (persistent organic pollutants) analysis. Recovering these items was significant, particularly for those who had volunteered in Fukushima prefecture. It was noteworthy that despite the large amount of debris washed into the ocean during the tsunami, and that we sailed through the projected debris field, the vast majority of floating plastic we observed appeared to be unrelated. 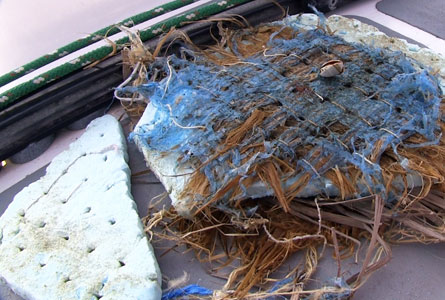 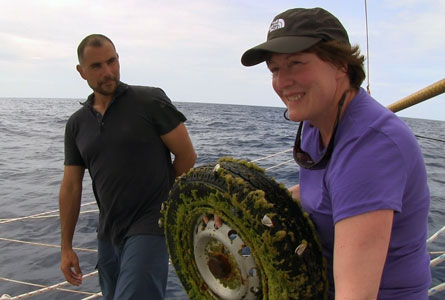 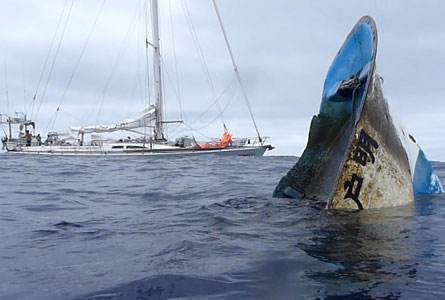 Finally after a month at sea, the last week beating against the trade winds, we are within reach of Hawaii. The voyage has not been without its challenges, heavy weather and a broken water maker, rotating watches and sharing close quarters with a dozen crew. The final hurdle is that our intended landfall of Maui is directly into the wind so we divert to Oahu, unfortunately missing the welcoming festivities planned for us.

The expedition was a true adventure, dodging typhoons and getting the job done under difficult conditions. Seeing the reality of plastic pollution in the open ocean has deeply affected us all, being part of this voyage has renewed my focus to spread the word about this issue, to speed the change necessary to end our contribution to the problem. There was much discussion on board concerning the causes and solutions to plastic pollution, despite our varied backgrounds the consensus for solutions lie in ending disposable design, implementing cradle to cradle concepts and extended producer responsibility .

An ocean was crossed, new friendships formed and it was with a stronger grasp of the implications of plastic pollution that we bid our crewmates farewell and leave the familiarity of the Sea Dragon to return to the various corners of the world we call home.

Thank you for documenting this adventure for us, Paul. I want to go next time!

You have done a commendable job! Congratulations!