Winter is the season of penguin huddles, eggs and amazing auroras! This last month at Mawson has been a hive of activity.

We’ve travelled in both directions along the coast to do the annual penguin census and visit the Emperor penguins at Taylor Glacier and Auster rookeries.

There are over 45 separate Emperor colonies scattered around Antarctica. Two of those are found about 100km west and 50km east of Mawson.

After many weeks waiting for the weather to stop blowing a gale, a group of intrepid Mawson winterers departed in two Hagglunds (Swedish over-snow vehicles), for a four-day adventure. 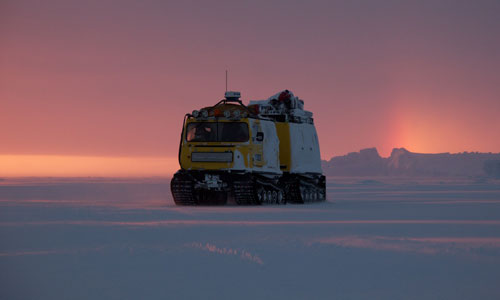 A Hagglund trundles across endless ice to the penguin rookeries, with “sun dogs” lighting up the sky. Photo © Mel Fitzpatrick

After careful planning and preparation - mechanical checks, gear checks, contingency plans, communication equipment checks and food packing - we were on the road! We headed west along the coast to the Colbeck Archipelago with a solid ocean platform beneath us – a road trip at the end of the earth! 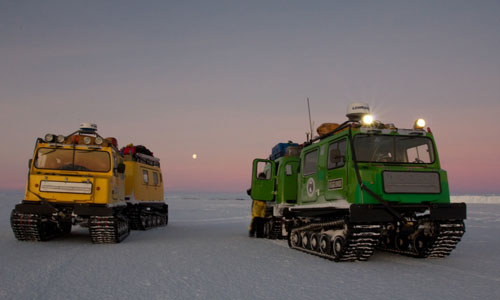 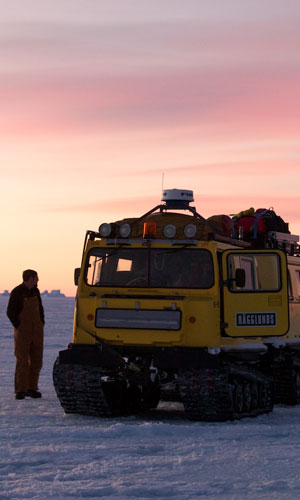 Several hours into the journey we enjoyed the sunrise colours bathing the sky in orange, pink and purple hues. From the comfort of our heated vehicles we spied caves and fissures in the grounded bergs in the distance. Occasional cracks in the sea ice floes – the work of tides and winds on this mobile expanse –kept us vigilant.  The trip along the coast took about eight hours and we arrived at our destination on twilight with a beautiful moonrise. 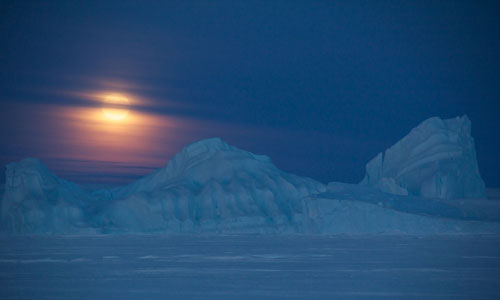 We had in our possession a special permit – to count penguins at Taylor Rookery. One of only three places in Antarctica where Emperor Penguins camp out on rocks rather than sea ice, this remote penguin population has been studied for almost 25 years. It was a special privilege to be able to visit the penguins in the middle of a cold winter, and to see the males huddling together for protection, carefully nursing precious eggs on their feet. There are around 3000 penguins in this colony. 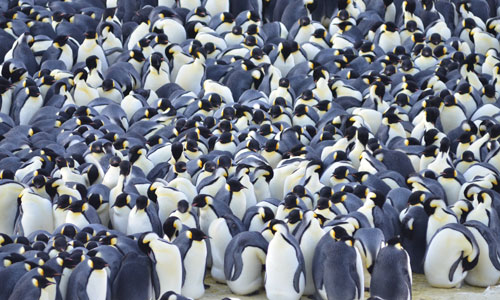 The following week, another group from the Mawson winter team headed to Auster rookery. This rookery is located to the east of Mawson on the sea ice protected by grounded icebergs. With around 12,000 birds the huddle is very active. Penguins continually rotate from the outside to the inside to maintain their temperature and keep their eggs warm. 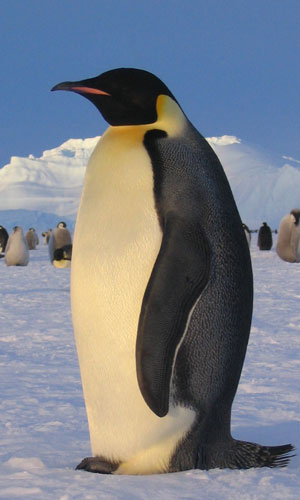 The Emperor Penguin (Aptenodytes forsteri) is the tallest and heaviest of all living penguin species. An adult male Emperor penguin can reach 1.2 metres in height. Photo © Mel Fitzpatrick

While the males are incubating the eggs, the females are at sea busily eating as much as they can, preparing themselves for several months of feeding chicks. This week, the females are just starting to return. 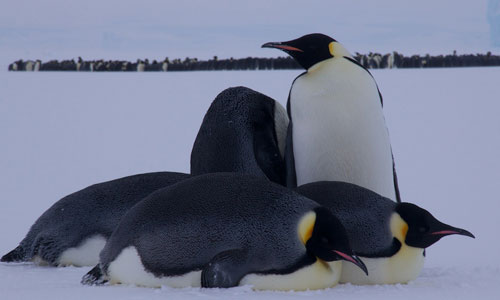 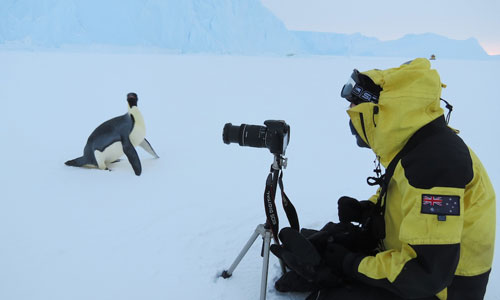 Some of the icebergs in this area have been attached to the coast as floating ice shelves for many years before breaking off (or “calving”) as icebergs. Underneath these ice shelves the sea water freezes on to the base of the floating ice. This sea water contains living material and when it forms ice we see it as a green colour. Often the underside of icebergs in some areas of Antarctica are an amazing green colour in contrast the blue colour of the ice formed from fresh snow. We are lucky enough to see these “jade bergs” if they happen to roll over in the process of weathering by wind and currents. 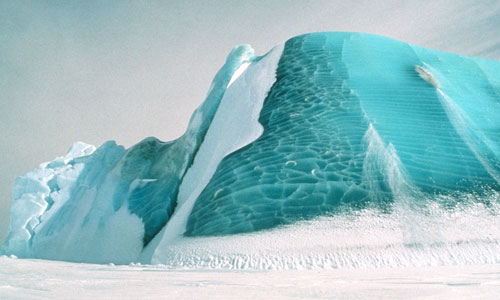 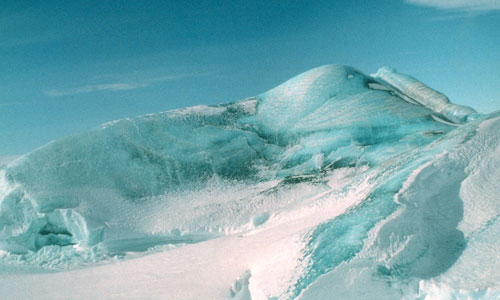 As well as visiting the penguins, we walked on frozen lakes - ice so clear in some places you could see to the bottom. The bottom and edges of these lakes are liquid water during the summer, making a great home for all sorts of microbes. 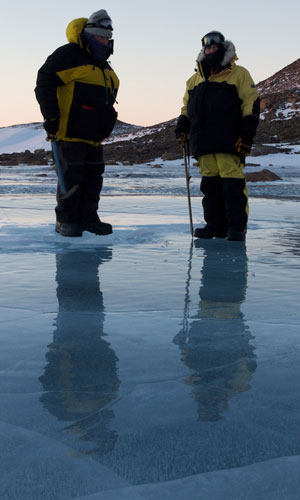 The lake ice contains bubbles of all sizes and shapes that are formed as the bottom and edges freeze again during early winter. This freezing happens deep beneath the permanent ice lens so new bubbles form at depth. As the wind continually erodes the top surface, these bubbles eventually reach the surface and then disappear. 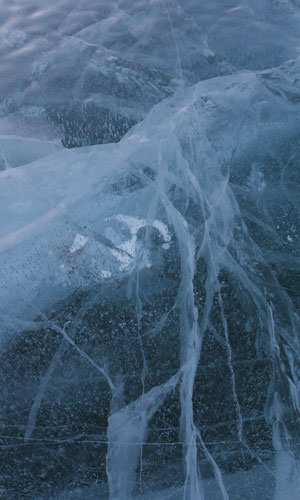 I’m continually amazed by the extraordinary optical phenomena in the atmosphere! Column shaped ice crystals result in stunning pillars of light extending up from the setting sun on the horizon. Auroras display their pulsing green veils late at night. Next post, I’ll tell you more about the atmospheric research that is being done down here. Till then, stay warm! 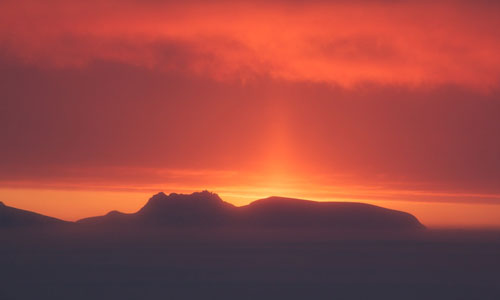 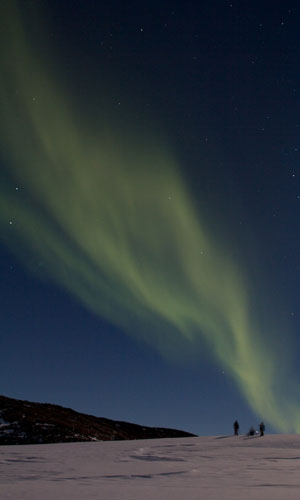 The pulsing green veil of an aurora. Photo © Mel Fitzpatrick

Hi Mel. Drove past 134 Burns and thought of you. What a brilliant adventure to be having! My Katie in yr 5 Prouille has been studying Antarctica, so I'll show her your blog. Hope all well, Sally Poirrier Oong