Have you ever wanted to walk on water? Down here in Antarctica, we often do! We’re lucky that for much of the year the ocean surface is frozen over.

In autumn, the ocean loses heat to the atmosphere and small crystals begin to form on the surface. As these aggregate, they form large sheets of ice or small circular pancakes, depending on whether conditions are calm or windy. The ice continues to accumulate into larger areas called floes, and before you know it there is a thin blanket over the ocean thick enough to walk, or even drive on.

Reaching an average thickness of a metre in a single growing season, the maximum coverage of sea ice around Antarctica occurs in late September each year. At its peak, the sea ice covers about 20 million square kilometres! That’s more than the area of the Antarctic continent and more than twice the area of Australia. 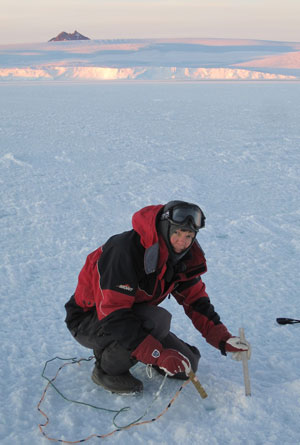 On a calm day, I measure the sea ice thickness about 2km from Mawson. After six weeks of growth, the ice is almost 80cm thick here. (Photo credit: Malcolm Arnold)

Part of our role at Mawson station is to collect measurements of the sea ice thickness and growth during the winter season for researchers at the University of Tasmania. The data form part of the Antarctic “State of the Environment Report”.

Once a week, we head out to four different sites at Mawson and use a small hand auger to drill through the ice. We measure how thick the snow is on top of the sea ice. Snow is a very good insulator, so once it covers the sea ice it slows down the rate of heat loss from the ocean to the atmosphere, which slows the growth of ice underneath.

We also use a tape measure to find the ice thickness and to check the depth of the ocean below the surface. For the last month, the ice in Mawson Harbour has been growing about 10cm a week and is now over 90cm thick.

To visit all the sites is about a 6 kilometre walk and can be quite a delightful half-day out. Last week we had perfectly calm conditions, with a pale pink sky and mountain views in the distance.  This week, however, the wind was blowing 35 knots and the temperature was about -15 deg C. Put something warm on and watch my video to see how much fun it is to work in these conditions!

The amazing thing about sea ice is how it changes the appearance of the ocean from very dark to very bright. The ocean surface reflects about 7% of the sun’s light. But freeze the ocean and cover that sea ice with just a few millimetres of snow and it will reflect about 90% of the sunlight that hits it! This is the largest seasonal change in the Earth’s albedo (reflectivity) anywhere on the planet. It affects how much energy the Earth absorbs from the sun, and thus affects the balance of heat that drives the atmospheric circulation. In addition, when the ocean surface freezes, salt is rejected into the water below, forming dense, highly saline water that sinks then heads north, maintaining the circulation of the planet’s oceans. The seasonal freezing of the ocean around Antarctica is very important for both atmospheric and oceanic processes. Sea ice reaches about a metre thick during a single winter growing season and covers roughly an area twice the size of Australia.

What the new sea ice growth means for life at Mawson is that soon we can start to venture out along the coast in both directions. Until now we have been confined to foot travel, but in the next few weeks we will be able to drive vehicles on the ice as well. 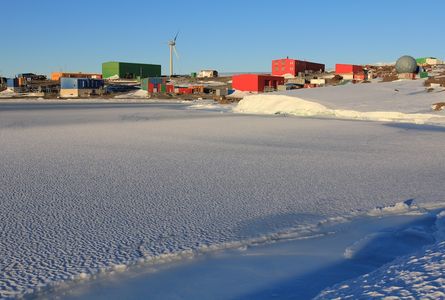 There are Emperor Penguin colonies near Mawson that we will visit throughout the winter. Look out for my next post on our first visit to Auster Rookery, about 50 km east of Mawson. 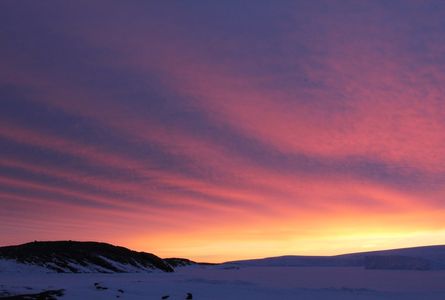 With spectacular sunsets and sunrises, the days are becoming noticeably shorter as we head into winter.

Words can't say how much I appreciate what you've mentioned here... Thanks a lot for this info.

Mel, great to see you?? Thanks really interesting will follow you blog now.