The journey to this end of the earth is a long and arduous one.  Leaving from the tip of Western Australia in mid-February it took us more than two weeks by ship to reach the most distant of the three Australian stations, Mawson.

Crossing the windiest, roughest, longest-fetch ocean on the globe (in the wrong direction – heading west!) in a 100-metre long orange ship gives me a sense of isolation, separateness, and disconnection from the rest of the world. 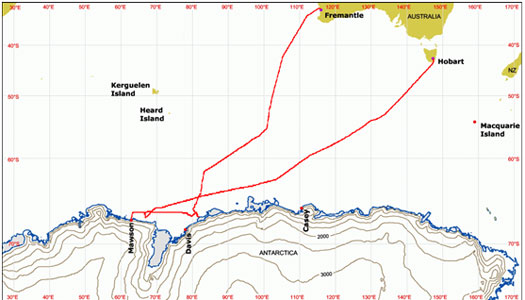 Mel’s travels – the voyage of Aurora Australis to Mawson, Feb 2012. The ship has returned – Mel is staying with 14 others over the winter (Australian Antarctic Division)

We are remote.  We are in a wild place, humbled by its dimensions - so huge a space, a horizon, an ocean, a continent.  The continent of Antarctica itself covers roughly half again the area of either Australia or the lower 48 US states.  It is simply quite enormous. The sea around Antarctica freezes every winter, doubling the area locked under a white, snowy blanket.  This fascinating ocean platform is home to the tiniest of plankton and algae, and the largest of whales.  It inspires in me a sense of wonder and awe at this amazing world we live in – in its fragility and delicate balance, as well as in its power and enormity.  But I also struggle with our place here, with our presence, with our impact…  We come to the end of the earth to discover what we have done to it, how we have affected the planet, and how we can redress the impacts.  What have we learned about living, about treading lightly, about preserving what we have?  I wonder… 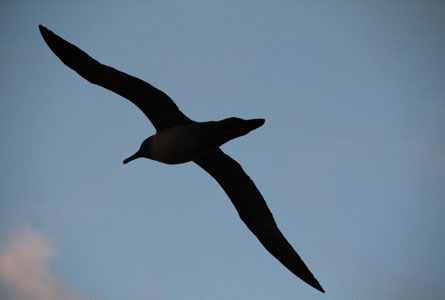 A frequent companion around the ship, the Light-mantled Sooty Albatross is captured in silhouette. (Photo: Mel Fitzpatrick)

As I arrive here – my tenth trip to the vast South land – the poignancy of the visit does not surpass me. It is one hundred years since Douglas Mawson set sail on a great adventure that would epitomise the best and worst of the heroic age. A century later, the Antarctica environment is just as inhospitable and challenging for human habitation. We can only ever be temporary visitors to this place. Mawson station is the longest continuously-operating station on the Antarctic continent. Located just inside the Antarctic Circle at 67.60°S, 62.88°E, it’s very long way west of Commonwealth Bay, the original home of Douglas Mawson’s “blizzard”.  Mawson station was established in 1954 and is currently home to a small group of over-wintering personnel, with scientists visiting each summer. 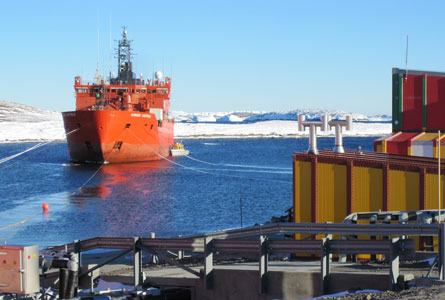 Aurora Australis at Mawson - the station is re-supplied during a five-day visit to Mawson each year. (Photo: Mel Fitzpatrick) 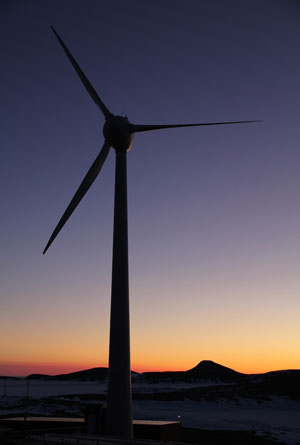 At Mawson, two wind turbines provide enough electricity for over half our energy needs, the rest coming from diesel generation. (Photo: Mel Fitzpatrick)

As the autumnal equinox passes, our nights here begin to lengthen.  Sea ice forms on the harbour next to Mawson station, and the nightly aurora continue to deprive me of sleep.  Daily minimum temperatures in autumn so far have hovered between minus 10°C and minus 20°C.  Over this time, the wind has varied from a single lack-lustre windless afternoon to a roaring 80 knots, keeping us on our toes.  Arriving as the autumn descends makes for a cold transition from the end of summer in Australia! 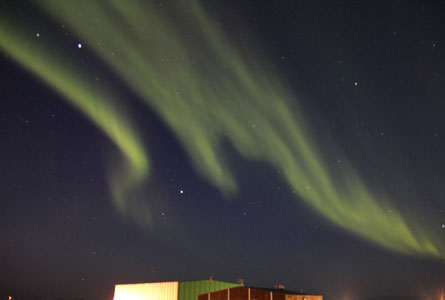 The southern lights, aka Aurora Australis. In a year of high solar activity, stunning aurora grace the view from my bedroom window. (Photo: Mel Fitzpatrick)

But today, I have woken to a clear, calm and windless day. Perfect time to head off for some sea ice measurements! As part of our science data collection, each week we drill through the newly forming ice and measure the thickness and quality of the sea ice. Later this morning, I'll pack up some instruments, put on my ice spikes, and head off for a 6km walk on the frozen ocean surface to measure three different sites near the station. Should be a great day out! Look out for my next post for an update.